NOTE: 04/27/2019.  I’ve made a bit more progress on this project thanks to HTC support over the last few months. I have Vive Tracker puck 1.0 working on a microcontroller. Valve is current blocking analog inputs from a Vive Tracker puck so in order to get the analog inputs working you have to make the puck look like a controller. In the past with other VR guns this was gone using a role changer provided by HTC. The role changer has been taken down by HTC but there are copies of it out there. However, it turns out everything you need to perform the role change is already installed by SteamVR. All you need to do is change a single line in a json file and re-upload it to your Vive tracker puck. That will have to do for now until Valve adds back official analog input support for the tracker pucks.

I also have continued to work on the Vive Tracker 2.0 puck with blue logo. Firmware has been released to add USB input and its been officially released in the SteamVR beta branch. However, no one has gotten it working yet that I’m aware of. There’s even an updated Tracker puck 2018 1.4 pdf but still can’t get it working. I’ll work with my 1.0 pucks for now but people can only buy 2.0 so it needs to be worked out eventually. There are still 1.0 pucks on eBay. Right now they’re going for $85.

I’ve also been working very hard in the last few months on recoil for my VR rifle. It’s come out quite well and I’ll have more to say in the coming months.

I wanted to design a current generation VR rifle for FPS shooter games for quite a while now. I built them many years ago by taking existing gun controllers and adding tracking to them. Back then it was Playstation controllers and gyroscope sensors from Gyration. It was a time for an updated version. Something like the PPgun but cheaper. I couldn’t seem to get myself to spend $800 for a PPgun controller ($1200 on eBay). Although I got a hold of one for $350. 🙂 There are other options as well: the Hyperblaster for $50, and the new StrikerVR Lite for $1200. I have the Hyperblaster and it’s great, but I want a full rifle with recoil. The StrikerVR Lite rifle coming for the HTC Vive tracker is also super cool, but that price is just way too high. If we had a VR rifle controller for around $300, that could be a sweet spot.

To start off, I designed a Vive Tracker isolation mount to a Playstation 3 rifle controller. Using a Vive Tracker was a path to add cheap tracking to a VR rifle.  I designed a direct mount version like shown in early Vive Tracker documentation, as well as an isolation based one for dampening vibrations. The isolation mounts are because the Vive Tracker doesn’t like vibration, and at some point I’ll be adding recoil to the rifle. It won’t be full blown rifle recoil like in airsoft guns (or will it…), but something like arcade gun haptic feedback. Some light solenoid recoil might be possible if it doesn’t vibrate the Vive Tracker too much. The intention of the designs is to use the USB interface of the Vive Tracker, but I also designed in support for the pogo pins. The first couple prototypes I build use the pogopins. My first 3D design for the two mounts is shown below.

What I’ve found out is that the only way to get the HTC Vive trackpad functionality is using the USB interface with a custom microcontroller board. Right now the USB interface only works for the original 2017 tracker puck(gray logo). The 2018 puck with blue logo has finally had its USB enabled but I haven’t seen anyone get it working yet. I have seen a working demo application on Android however so it should be possible. I happen to have 4 of the 2017 trackers so I’m going to use USB. Other than x-y trackpad data, most buttons can be controlled through the pogo pins. This is what the Hyperblaster does. It makes the gun cheaper and easier to build using the pogo pins, but I really don’t like teleportation in VR games so I want that trackpad for locomotion.

There are also Arduino libraries now using a SAMD board, as well as Arduino DUE, to talk to the Vive Tracker over USB. So find a rifle, modify it for buttons, mount a Vive Tracker on it, add a MCU board inside of it, put in recoil, and you have a pretty sweet rifle controller for VR using the Vive tracker. Sounds like fun!

The first prints turned out quite nicely for the isolation mount and even the direct mount. The 1/4″-20 knob and bolt, not so much so I tested some real camera tripod parts as replacements. None of those worked well so I printed a knob for a 1/4″-20 bolt head. Here’s a few closeups of the isolation mount on the gun from the image at the top. Came out really nicely. I love 3D printing!

My next revision of the isolation mount is shown on the far right in the image below. This was an updated model of the center mount based on lessons learned from my first prototype gun described below. The main updates were thinning the body so the 1/4″-20 knob is easier grab, using a real 1/4″-20 bolt instead of a 3D printed one, and to move the isolation mounts onto the corners. Minor tweaks were made to dimensions as well. I had this version printed and they turned out nicely, as I’ll show below. 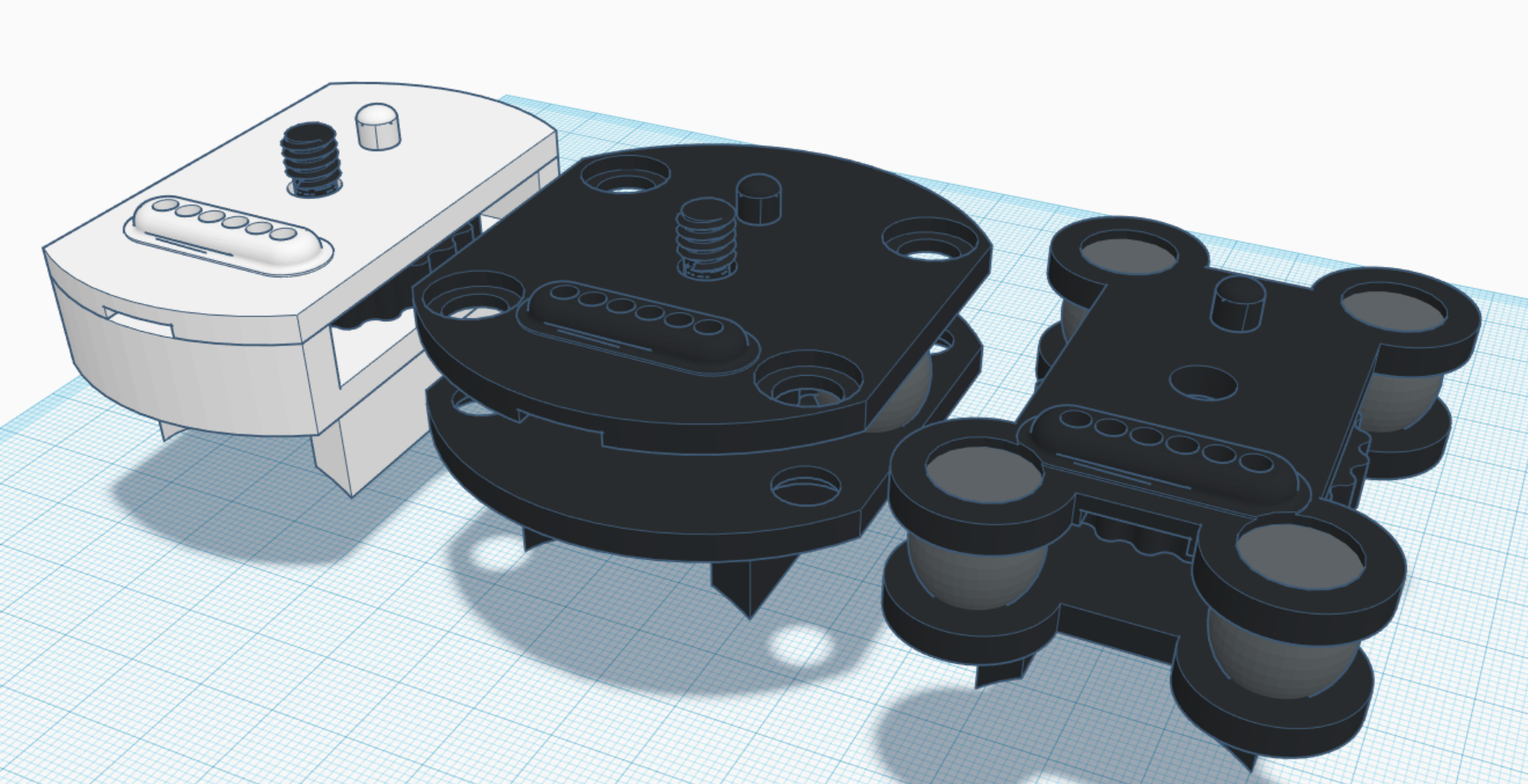 I built the initial prototype using just the pogopins of the Vive Tracker. This is basically a PPgun or ScarVR duplicate but at a far cheaper price. The PPgun is going for $800 right now plus shipping which brings it close to $900. A new gun is out now called the ScarVR which is cheaper at $399 but with shipping to the US comes out to almost $500. Both of those guns use only the pogopins on a new Vive Tracker 2018 with blue logo, or the PPgun can use the trackpad functionality with an older Vive Tracker with gray logo. I’ll remind you those prices are without the cost of the $99 Vive Tracker. The one I’ve built below cost me $65 for the gun, $50 for the custom 3D printed mount, and then $99 for the tracker. I do lack the haptics in my first prototype that the PPgun and ScarVR have but I’ll be updating for that in the future. The point being is that for around $115 you can build your own and avoid be gouged by $500 and $900 prices.

My first prototype above had lots of extra unused buttons much like the PPgun. The PPgun was a stand alone controller which was later modified for HTC Vive tracker use so there are buttons that don’t map to VR. I took the same approach to keep cost low. I’m also using the isolation mount even though I don’t have recoil currently. There is a haptic motor inside but its not real rifle recoil. Just a buzzer like in PlayStation controllers. I used lessons learned on this first prototype to build a second one with updated mounts. I was able to play Overkill VR using the PPgun setting and it worked like a charm. I’d tried some other PPgun listed games with less success.  Support for games is really non-existent.  The gun is trying to emulate a controller in almost all of the games much like in the old days of VR when trackers tried to emulate a desktop mouse.

I worked on the USB interface to regain the trackpad and have the 1.0 puck working. HTC support has been working with me for months to try to get the 2018 tracker puck working over USB. No luck yet but I hope its getting closer.

I then started working on the US Army Elite Force Assault Rifle. Here’s a close up of the new REV3 mount. It came out quite nicely. The real 1/4″-20 bolt works a whole lot better than a 3D printed one. 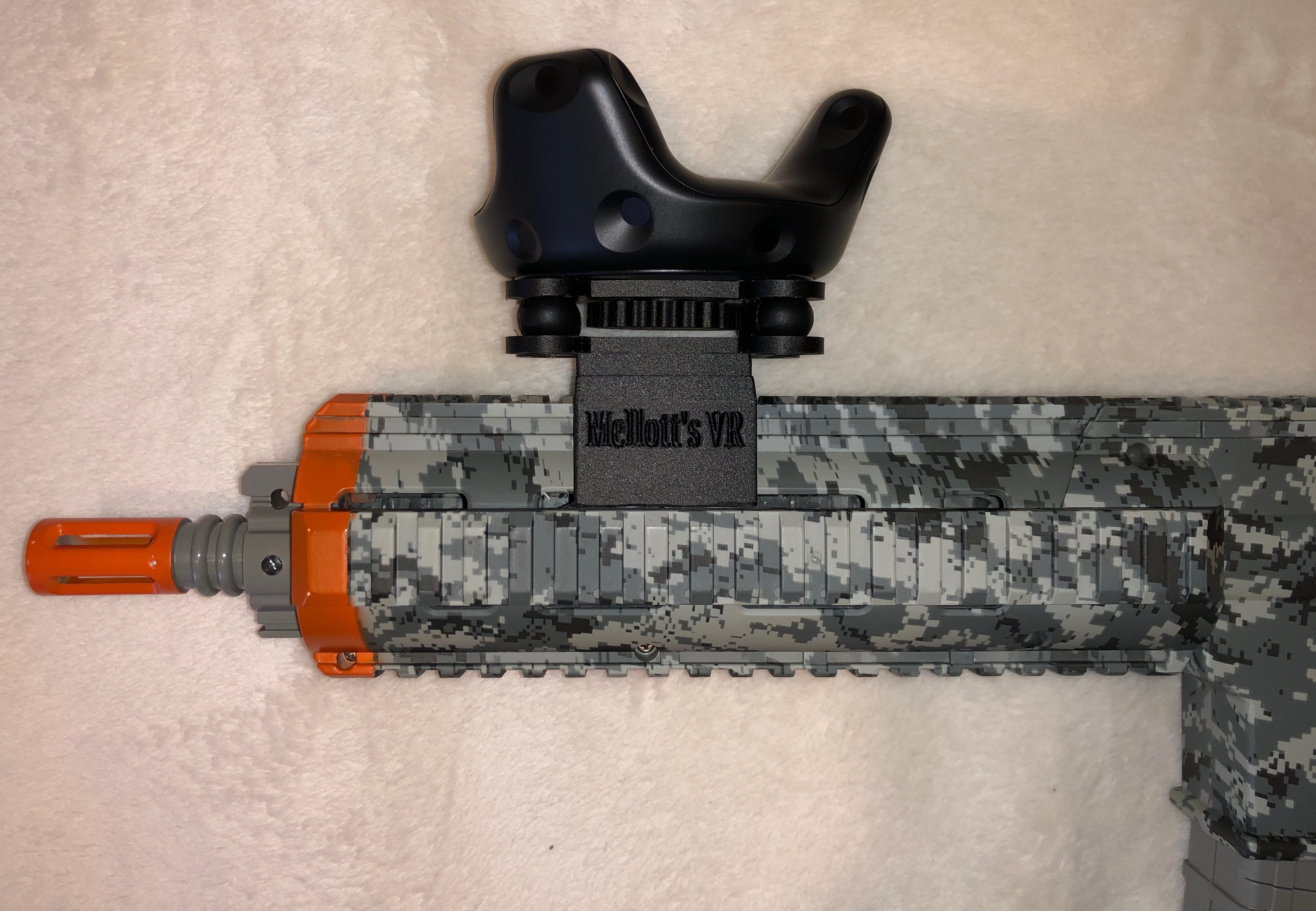 A close up of the mount itself. I’ve switched to silicone wires now to make the pogopin cable to the gun much more pliable. I also switched to a black cable sleeve instead of the previous red. My new mounting knob using an actual 1/4″-20 bolt is also clearly visible. 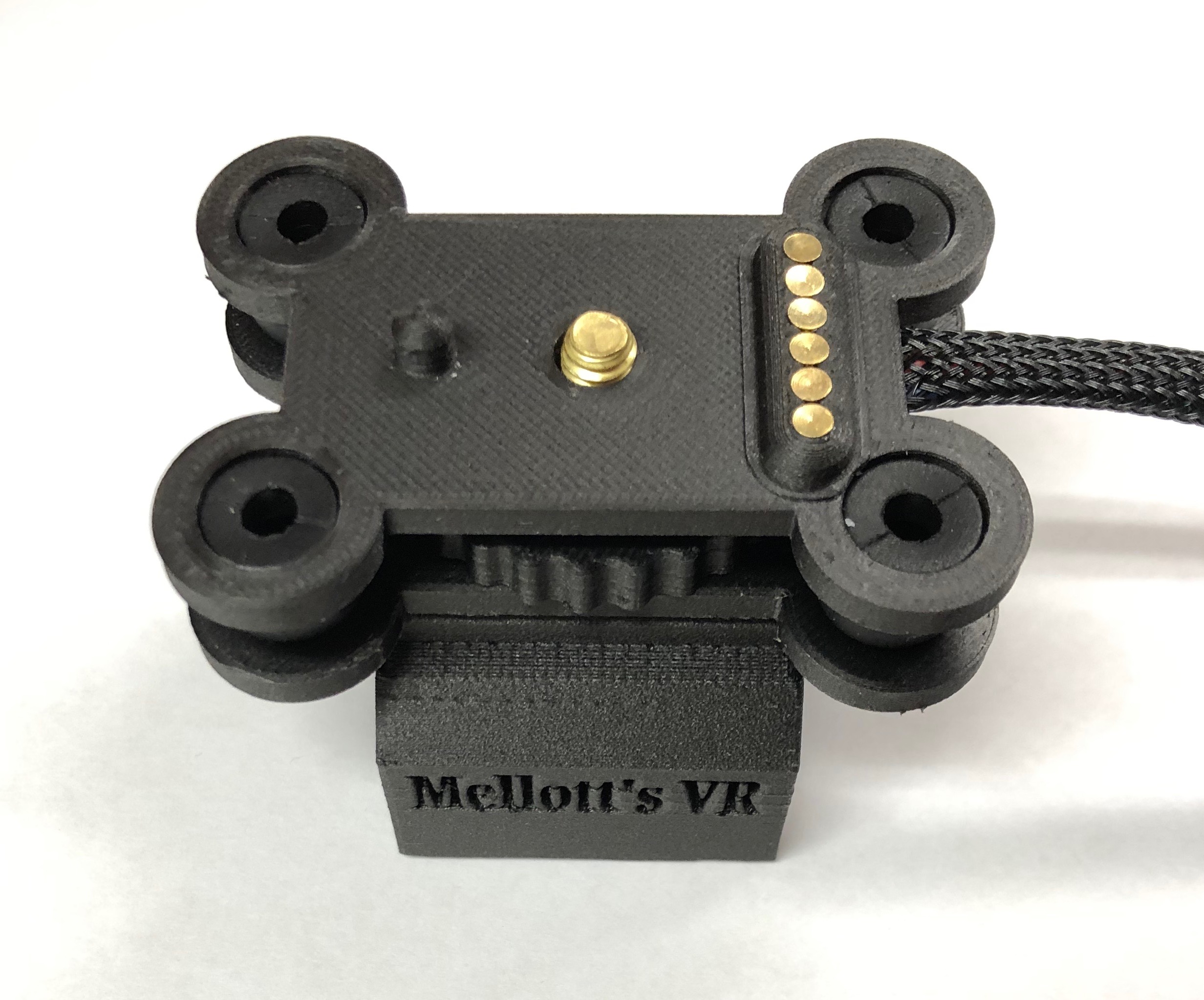 Here’s the Army Elite Force rifle with the tracker mounted.  It works off the pogopins like prototype #1 but with improved wiring and mounting.

I have a couple other gun housings that I may build mounts for as well. One of them is the Top Shot Elite gun controller which can be bought on eBay for $25 for a pair right now. I received a mount for this one but it needs a bit of tweaking before I show it off here. Another is the Recoil SR12 which happens to be on clearance everywhere right now for $40. The SR12 includes a simulated recoil. The recoil isn’t great but it works. Interesting that the color scheme is very similar on both of these rifles.

I’m even looking at the old Delta Six gun. I may try to get my hands on one from eBay if the price isn’t too crazy.

A final idea is to modify KWA ERG airsoft guns which have built in electronic recoil. That last one is more involved than all the rest as I have to recreate the controller stick and buttons. It also raises the cost significantly because the ERG guns cost $279 by themselves. Baby steps… 🙂

OpenVR Input Emulator was made by matzman666 so he could play games with his own homemade rifle. It’s said that its not going to be updated due to the new SteamVR controller bindings, but from what I’ve tried so far its still a must. It’s the only thing that works to get the gun correctly mapped in the games. Haven’t been able to figure out all games via the native SteamVR controller bindings. For example, Overkill VR seems to use native bindings and I can align by changing the pose bindings for the Vive tracker. However this doesn’t work for Warcade VR or John Wick Chronicles, but OpenVR Input Emulator works for all of them. Version 1.3 works with the current non-Beta SteamVR version 1539100633 built Oct 9, 2018 at 08:57. Hopefully they don’t break it in the next update!

I now clearly understand why we haven’t seen peripherals come out that use the Vive Tracker.  Pogopin only use of the Vive Tracker is very limited and currently the 2018 Vive Tracker is really only good for tracking without any USB input.  I hope to work through the remaining issues on the current 2018 tracker puck soon and couple that will my new recoil to create an awesome VR rifle!