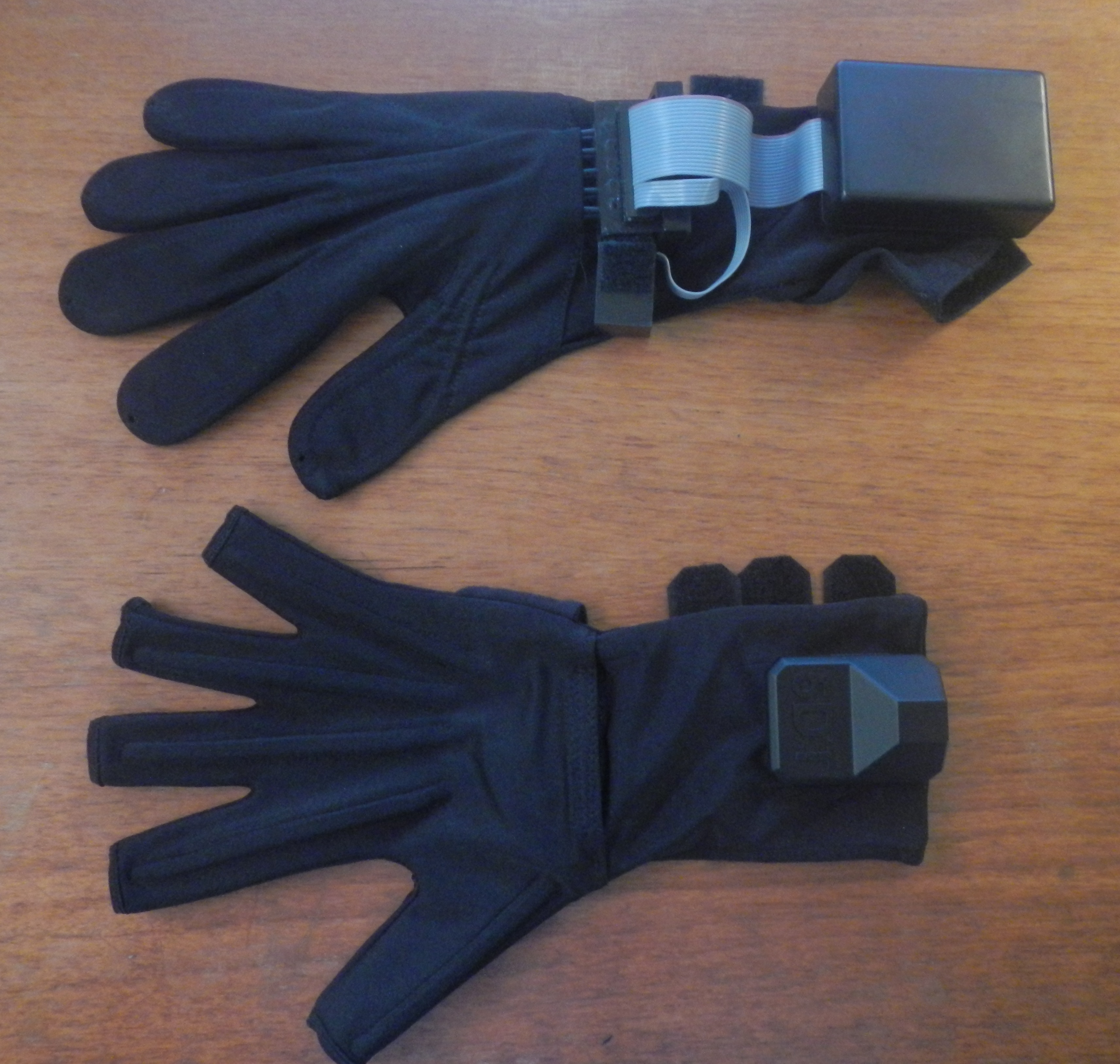 As you can see in the images above a few things have changed. The older 5DT glove used plastic fiber for flex sensors that extended from a housing on the wrist, looped at the finger tips, and came back to the housing. Inside the housing are LEDs and photodiodes that sense the amount of light that makes it out the LED and back into the receiver. As the fiber is flexed the amount of light is reduced and thus flex is sensed. The fiber is scored in some fashion along the fiber to make the flex sensitivity higher. This is typically done over the knuckles. The older glove also includes a tilt sensor as a small block attached to the side of the optics housing. You can see some large ribbon cable and a large plastic enclosure typical of older electronics. On the back of the larger enclosure is an RJ12 connector. The larger enclosure houses the ADC’s and trim pots for the flex sensors along with a microcontroller. At the end of the cable that plugs into the RJ12 is a RS232 port and a separate power connection which requires an AC adapter. The RS232 port is connected to a computer and glove data is streamed into a program or the 5DT Glove Manager.

The newer glove is obviously a bit sleeker. There’s no optics housing as now the sources and receivers are housed directly in the end of the sensors. The sensors are a bit different now as well. They don’t appear, at least from the outside, to be plastic optical fiber. They’re encased in a rubber and placed in fabric slots along the fingers. I didn’t attempt to cut one open because the glove is $1k compared to the older $500. The enclosure at the back of the hand seems very sleek except for the extension to house the RJ12 connector. This is an odd choice because at the other end of the cable is a USB type A connector. The entire enclosure appears to grow in size on one end just for the connector. No external power supply for the newer glove. Also no tilt sensor. It would have been nice to see a MEMs sensor built in. The finger tips are open on the newer Ultra glove which makes it easier for typing and fine manipulation of objects while still wearing the glove.

That’s about it. The 5DT gloves are great devices. They just simply work. Wish they were a bit cheaper but they serve their purpose.