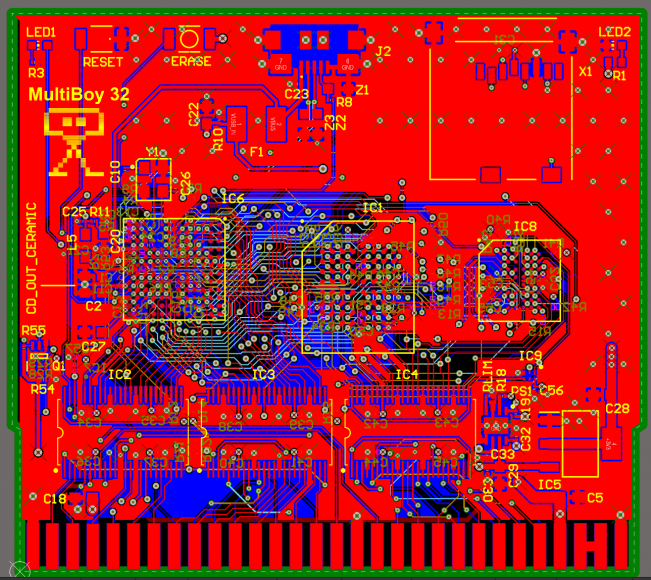 I’ve been working on a multicart for the Virtual Boy over this last month or so. I announced that I was working on this over on PlanetVB.com on 3/5/2019. This was something I hinted at in the past and have finally come around to it. I’m calling it MultiBoy 32. The intent is to bring a multicart finally to the VB and hopefully breath more life and interest into the Nintendo Virtual Boy.

I chose the MultiBoy name for obvious reasons. There are several reasons for the 32 number. There will be 32 slots of 32Mbit for a total of 1Gbit Flash (ROM) space. This cart also has 256k x 16 of SRAM space, which is divided among the 32 slots to give 8k x 16 (close to the production cart SRAM space of 8k x 8 but wider bus width). The microcontroller on board is also 32bit (cheaper than comparable 8 bit, faster to program slots, built in USB). I’ll probably run the MCU at 32MHz just to hammer home the 32 number.

The reason I’m announcing now before the cart is totally completed is because the board is dense, and with several BGAs, there will be NO hand assembling of these units. I will have to get this assembled by my PCB house and that means knowing up front how many to order.

So if you think this is something you’re interested in, then please let me know. Only collecting an email list for now. Please email me at mellottsvrpage@gmail.com. How many units get ordered will affect the pricing. I can’t commit to a price at the moment but based on my experience with VB projects and the current BOM cost, think ~$150. More details to follow.

Timeline, we’re probably looking around 4-5 months from now. I also need the on-screen code for the title selection (volunteers?). Even 5 months might be aggressive if ducks don’t all line up. Think summer release. I will do a small 25 unit prototype run initially before doing the full hopefully ~100 unit production batch. Next steps are to get fabrication and assembly quotes.

Currently I have the design out for quote for board fabrication and assembly. Initially I’ll have a small prototype run built for testing and development. Once those are verified and all of the functionality is in place, I’ll order the bulk order for those who have expressed interest. Most likely I’ll need to have everyone preorder to get the bulk order done as its likely to cost several thousands of dollars.

That’s it for now. I’ll update this page with more information as the development continues. Thanks!