Leap Motion produces a piece of hardware that tracks your hands in a space above the controller itself. Originally released in 2013, it was meant to sit on your desk and look upwards towards your hand. I met with Leap Motion in San Francisco prior to release of their hardware. During the meeting David Holz demonstrated the Leap hardware for us and it was quite impressive to behold. However, I was never allowed to use the system itself. After release in 2013 many were disappointed with how the Leap hardware performed and the Leap hype bubble popped. Leap Motion planned on selling 5 million hardware units but only sold upwards of 500k. 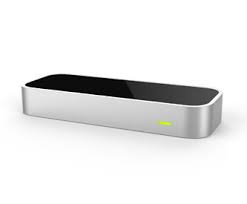 I’ll admit that after purchasing one at Best Buy a few days after release I was very disappointed as well. Most of the time the leap hardware didn’t seem to track my hands very well and when it did, the demos weren’t that impressive. Leap Motion is now pushing their hardware again but now as Leap VR. Leap VR mounts the sensor to an HMD and looks outward at your hands. It even allows a pass through of imagery so you can see beyond the HMD. Currently it’s being targeted towards Oculus DK1 and DK2 HMDs however Leap is hoping to integrate their hardware and software into HMDs in general. Below is a screen shot of the Leap Motion VR Intro demo using the Oculus DK2. 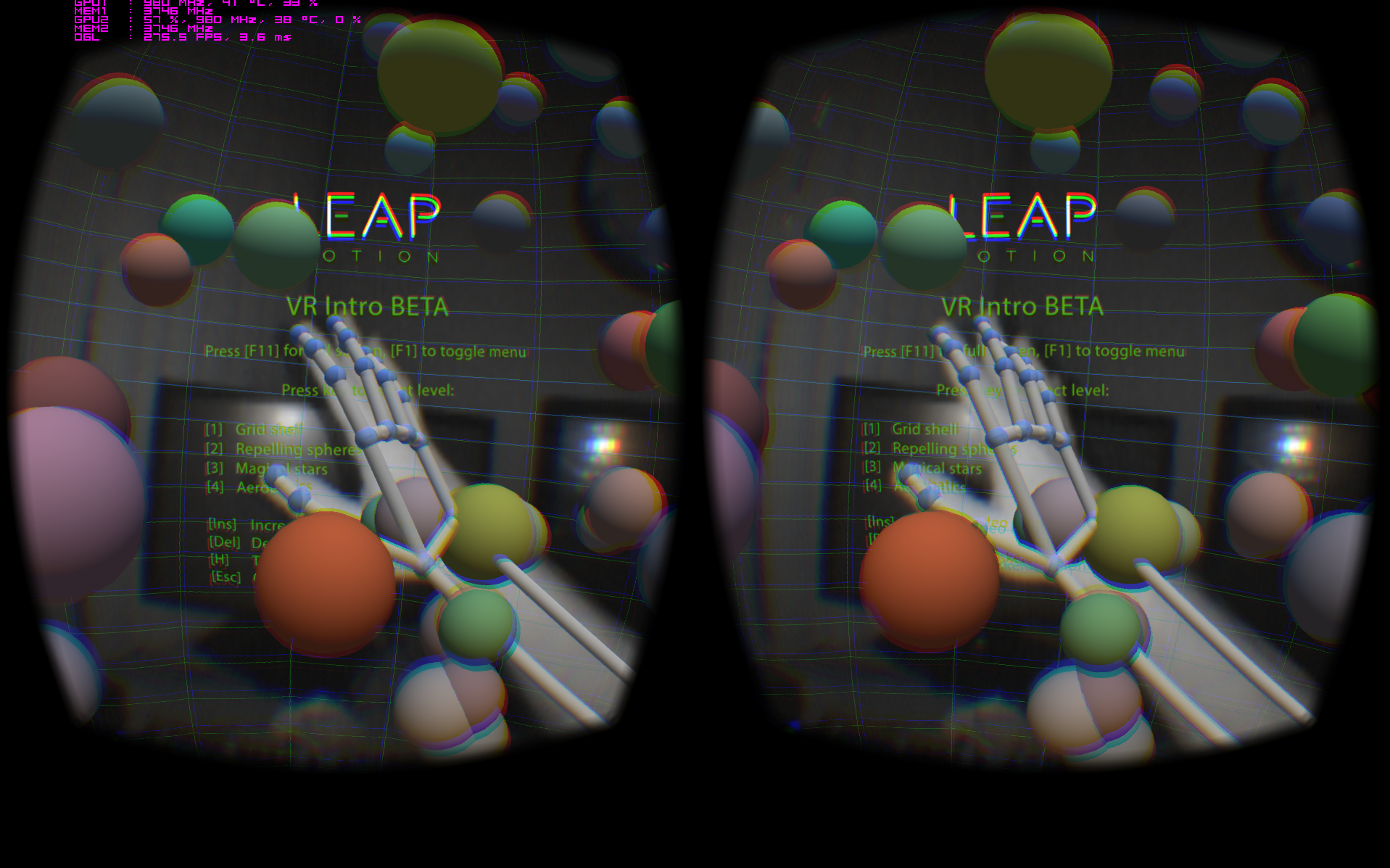 When the Leap hardware is working it’s quite impressive. I can see the potential of this technology. However, about half the time it doesn’t work which is very disappointing. I think in general people have very little tolerance for input devices that don’t work 100% of the time. Imagine if your keyboard or mouse only worked half the time. You’d throw it away and get a new one. 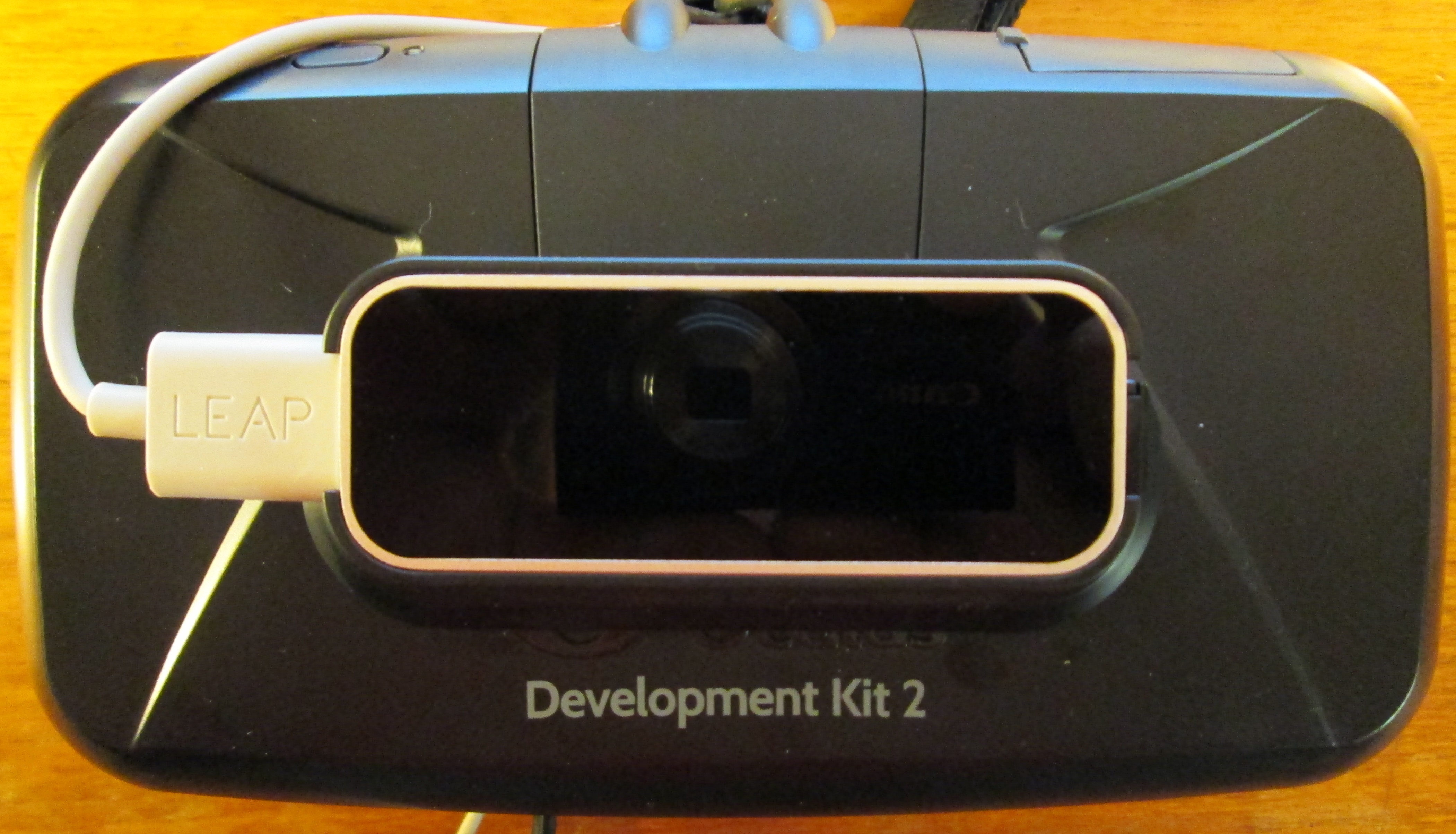 The Leap hardware now mounted to the front of the Oculus DK2, as shown above, seems like a perfect marriage of devices. The pass through of the Leap hardware is actually quite nice because now I don’t need to lift my HMD off to see the outside world. Even if it’s low resolution, it’s still very useful. However, now with the Leap cameras facing out, typically towards your desktop or other surroundings, it has an even harder time tracking your hands. This is because now your desktop and other items reflect IR light coming from the cameras and appear white just like your hands do. This makes it near impossible for the Leap software to pick out your hands and track them. I found it worked best when there was about 5 feet between the Leap hardware and any near by object. Unfortunetly this is almost never the case except when I’m looking up towards the ceiling. 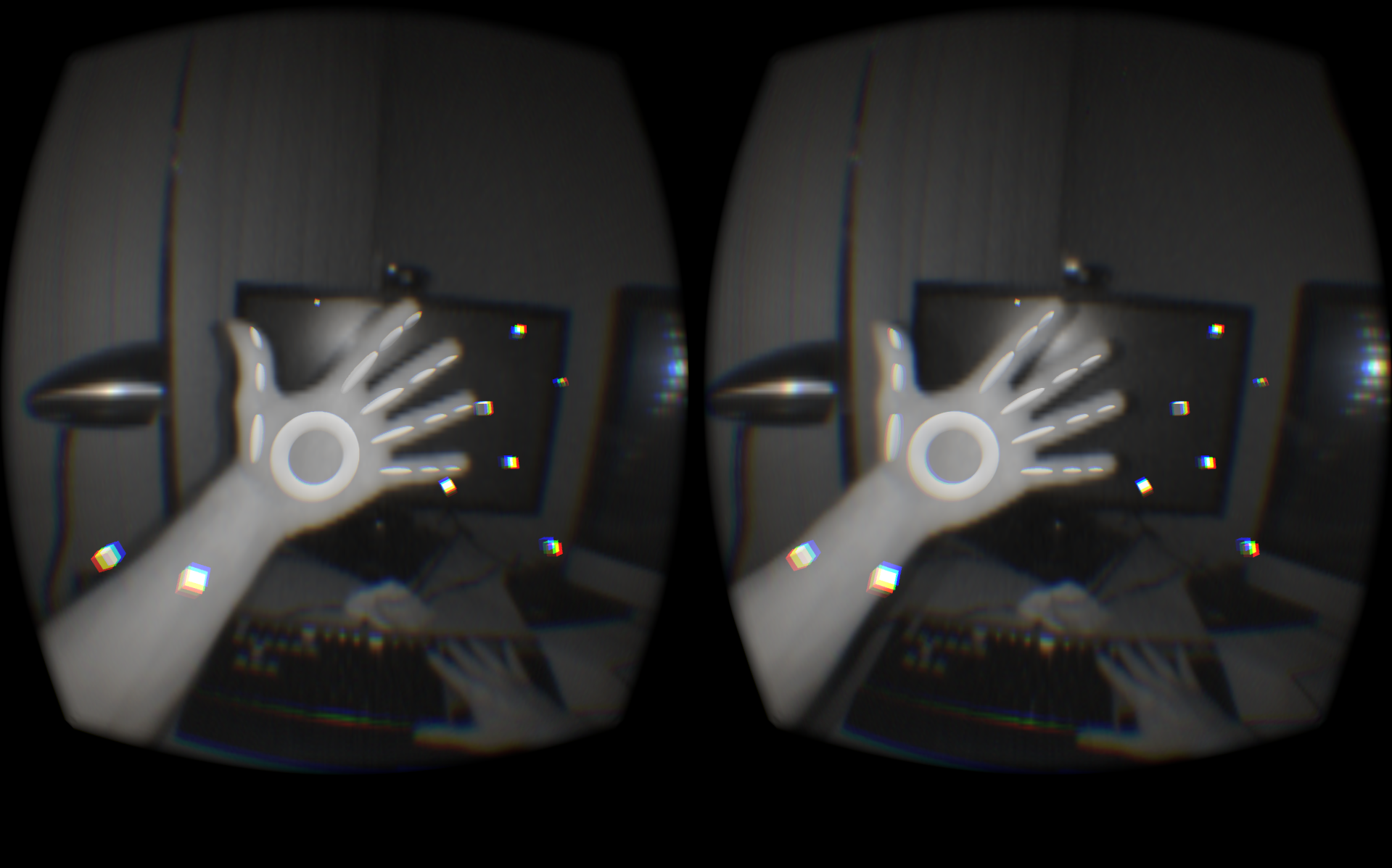 Now Leap Motion does list several known issues currently with the Leap VR. The sad part is these exact issues are what make it unusable about 50% of the time. It has issues if too much of your arm is within view of the cameras, which will happen quite frequently in the Leap VR configuration. Tracking is also lost when your hands touch each other or when you clasp your hands. Whenever it doesn’t have a clear few of your individual fingers against a darker background, then in general it can’t track them.

It’s quite disappointing to be in the unique experience such as the “Repelling Spheres” demo within their “VR Intro” application and continually have your hands drop out. Many of the Leap VR demos appear to be very gimmicky. They’re useful to show the sensor operation but after about 5 minutes you’re left wondering what useful application can the sensor actually have. I was also very disappointed that in the “Repelling Spheres” demo I couldn’t actually grab any of the spheres, only bump them with the fingers or hand. You want to be able to grab one and hold it in your virtual hand but you can’t. Maybe with some more work with the SDK, not sure.

My imagination tells me this could be a great product has great potential. You could use your hand to grab a pistol in a game, interact with 3D objects in CAD environments, or have more natural interactions within a simulation. As humans we constantly use our hands to manipulate and communicate so a device like Leap seems like the natural direction. Sadly, it just doesn’t work well enough to pull it off. I really really want to like this device but it’s just not quite there. Maybe in some unique, very controlled environments, it could work more robustly.

The Leap Motion controller is a great experience for a demonstration but I wouldn’t count on it being a robust input device for most VR applications.